Exploring the five most visited US destinations 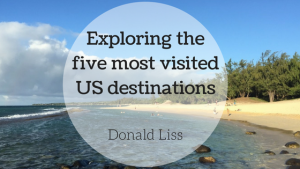 I previously explored a few of the least visited locations in the United States, and while there are many of those, there are, conversely, a variety of US destinations that annually enjoy large amounts of popularity. These cities encapsulate a long list of attractions, cultural traditions, and environmental sights that make them stand out as unique compared to their numerous counterparts.

Here is a closer look at the five most visited US destinations, as compiled by Business Insider.

Considering Hawaii’s tradition of vast beauty and nearly incomparable natural wonder, it is no surprise that the state is home to three of the most visited cities in the US. Oahu is one of these destinations, standing out thanks to its thriving nightlife scene, breathtaking array of beaches,  and plethora of great foods (including a particularly satisfying line of shaved ice products.)

Sometimes described as the “cultural capital of the world,” New York City is arguably the most iconic and regarded city in the United States. The city’s reputation makes it a highly coveted US travel destination — perhaps for its historic buildings and landmarks alone, ranging from the Empire State Building to Madison Square Garden. The city’s cultural landscape and social offerings are just as vast, making NYC a premiere future visit.

Another Hawaii-based city, Maui is “renowned for its beauty, its atmosphere, its history, and its never-ending supply of pristine beaches, waterfalls, Maui tours, landmarks, Maui Snorkeling, and gardens,” and that is just the beginning! Clearly, there is always something notable going on in Maui, regardless of the time of year.

One of the most famous (or possibly infamous) cities in the US, Las Vegas is at no shortage for tourist offerings. From a seemingly endless list of top-level casinos to a wide variety of eateries, museums, and clubs, “Sin City” is almost guaranteed to be a memorable trip. When you want a break from direct city action, you can take a trip through the nearby Red Rock Canyon National Conservation Area.

Yet another Hawaii location, the state’s “Big Island” stands as the nucleus of its string of island cities, containing the most landmass by a longshot. However, the island only contains about 13 percent of Hawaii’s population, leaving much of it to the natural beauty of its tropical landscapes. Be sure to check out Akaka Falls, one of the tallest waterfalls on the island, and the Pana’ewa Rainforest Zoo, which holds over 60 species of animals.